We observed in the preceding page A Simple Observation that the force exerted against a surface by a “burst” of air will diminish if the distance increases, simple observation that leads us to sum interesting possibilities.

For instance, if we have a pressurized spaceship in 0g with a free floating mass (M2) inside, if the mass (M2) has a propeller (motor and batteries included) and the propeller is switched on for 3s, two things will happen:

One: mass M2 will gain velocity in the +X direction.

Remember what this man said:

We need an airtight structure (box), and we must turn on the propellers for x seconds at different positions.

Position 1, near the box’s opposite side.

Position 2, far from the box’s opposite side.

If the resulting force (which we can deduce by box’s change in position/velocity) is the same regardless of the propellers position, I am wrong and will never bring this idea up again.

If the resulting force decreases as the distance increases, well that means we have a new method of space propulsion.

The method has been tested horizontally on ball bearings, dry ice plucks and floating on water, however in order to eliminate the influence of friction I shall suggest the following “test rig”

We put a motor and propeller (representing mass M2) balanced by a counter weight hanging from a string (Fig 1), this permits the assembly to easily rotate around the vertical axis and will represent the movement of the inner free floating mass (M2).

Cutaway (Fig 3) illustrates the balancing motor can turn on its vertical axis independently of the surrounding perimeter / support / separators for an approximately 40º angel before colliding with one of the separators.

Turning on the motor/propeller near (almost touching) “rear” separator

If we position the motor/propeller assembly as close as possible to the “rear” separator (fig 4a), turning on the motor blows air directly against the “rear” separator giving the perimeter cylinder a clockwise movement (green arrows), the balancing motor/propeller assembly will accelerate in the counter clockwise direction (blue arrows) (fig 4b) until it collides with the “forward” separator bringing the perimeter cylinder’s clockwise spin to a standstill (fig 4c).

In the described configuration it is difficult to obtain an increment in rotation of the perimeter cylinder, the spacecraft will not accelerate.

Breakdown of results with motor/propeller near (almost touching) the “rear” separator/target surface.

If we position the balancing motor assembly’s initial position far form the “rear” separator (fig 6a), with a approximate 35º angle (θ 3), when we turn on the propeller the balancing motor assembly accelerates in the counter clockwise direction (fig 6b) as in the previous experiment, but the perimeter cylinder’s clockwise acceleration is significantly less than the previous experiment, this is because the force exerted against an object by a (non laminar) gas flow decreases when the distance separating the gas source (propeller) from the target surface (separator) (see).

The instant of collision between the balancing motor assembly and the “forward” separator (fig 6c) finds the perimeter cylinder has made only a small clockwise movement, and the momentum transferred by the balancing motor assembly to the perimeter cylinder is sufficient to accelerate it in the counter clockwise direction beyond its original position and continue turning in the counter clockwise direction (fig 6d).

By repeatedly inverting the direction of the propeller (Note 3) it is possible to continually “bump” the “forward” separator constantly increasing the perimeter cylinders counterclockwise velocity. (See cycle for generation thrust on a spacecraft) 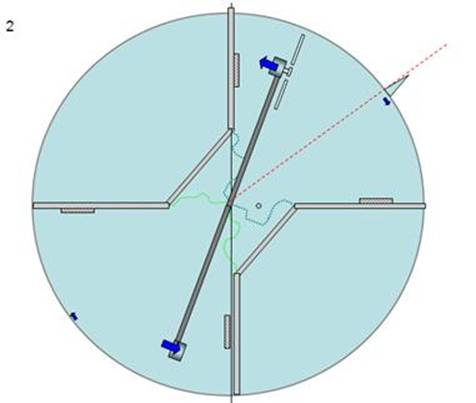 Breakdown of results with motor/propeller as far as possible from the “rear” separator/target surface.

When we turn on the motor, the clockwise angular displacement of the perimeter cylinder is depended on the distance that separate the propeller from the “rear” separator, (Videos 1, 2 and 3), this is because the force exerted against an object by a (non laminar) gas flow is inversely proportional to the distance separating gas source from the target surface.

The balanced motor assembly continues to gain angular velocity until it collides with one of the separators (Fig 17c), it transfers momentum to the perimeter cylinder that gains velocity in the counter clock wise direction, the balanced motor assembly bounces in the clockwise direction, the cycle can be repeated indefinitely by changing the direction of the propeller (see Note 4) at the appropriate moment (see videos 2 and 3)

Some are disturbed because the experiment appears to contradict the law of conservation of linear momentum, others that have given the matter some thought believe it does not.

This video (4) is for demonstration/explaining purposes only, it does not constitute any kind of “demonstration of proof” for although the little car’s bumping does make the frame rotate, it only rotates at a constant speed.

There are various apparatus that are capable of continues velocity, a successful experimented must demonstrate the ability of CONSTANT ACCELERATION. (As illustrated in figs 6 and 7)

An artifact that may move a closed system from one spot to another may be useful in satellite positioning, but we need constant acceleration to reach the stars.

After repeating the experiment numerous times we can:

It is possible to increase the frame’s rotation if the contained mass is made to accelerate with no direct contact with the cylinder by means of air currents (figs 25 to 33).

This experiment is presented to observe a simple method of propulsion for spacecraft and can be easily replicated.

No insights on apparent conflicts with the conservation of linear momentum law are offered in this particular document.

Note 1 What about ’s third law (To every action there is always an equal and opposite reaction)?

With every collision (we are taking billions and billions of collisions) two equal forces hurl the colliding molecules in different directions, the magnitude of the forces does not change but the vector direction are randomized with every collision. See kinetic theory of gases.

If we reverse the direction of the motor the objects will return to their original position. It is not possible to give the perimeter cylinder a constant angular acceleration if the balanced motor assembly is restrained to a fixed angle by separating panels.

At most we can obtain a cyclical clockwise anticlockwise oscillation

To control the propeller motor (on-off-left spin-right spin) it is best to use a RC controller so that no external cables protrude from the assembly.

Obtain an inexpensive toy RC car or other toy

Connect the control wires of one of the toys motors (most have two or more) to the propeller motor, in this example a normal LEGO motor (fig 12)

This setup will control the propellers direction remotely.